Are we focusing on the right things?

September 15, 1940. It was 10:30 in the morning and ten miles from the French coast, off Cape Nez Griz, forty German planes were racing toward England. 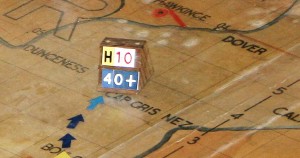 Keith Park, the Group 11 Commander couldn’t see them directly, but a wooden block pushed by his aides across the English Channel on the map table before him signaled their inexorable progress.

That block told him they were coming, but it didn’t tell him much else.  It certainly didn’t answer his most important concern, whether this was a real attack or just a feint.

Was this group of 40 planes a formation of bombers, inbound to attack England? Or were they the less threatening Bf109 fighters?  If they were bombers, they were a threat and he would have to launch fighters to intercept them; to commit his resources.  If they were fighters, they couldn’t cause any substantial damage. It would be a diversion.  The Luftwaffe had been launching feints with fighters at the coast all summer, hoping to draw Royal Air Force fighters into the air. If the RAF took the bait, it cost valuable fuel and, even worse, aircraft and lives. Then, after a meaningless sortie with German fighters, while British planes were forced to land to refuel and rearm, the enemy’s main bomber force would pass overhead unopposed. 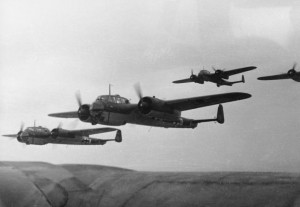 A flight of Dornier Do-17 bombers. These were a real threat to the RAF and England. 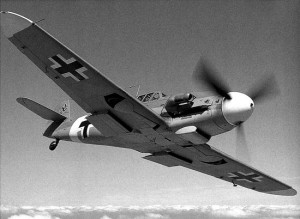 The BF109 was the main Luftwaffe fighter used in the Battle of Britain. Alone they were not a threat, unless the RAF responded to them.

The question was critical.  The long summer had turned into autumn and Fighter Command was on its knees.  The Luftwaffe had pounded the RAF’s airfields, attempting to clear the way for a Nazi invasion.  The RAF had lost too many pilots.  Germans were killing them faster than replacements could be trained.  Park desperately held the line with dwindling resources, trying to keep his forces intact until winter.  If he could survive that long the weather would force the Germans to postpone their invasion.

Park considered this as the plotters pushed the raid block across the English coast.  If his planes were going to intercept, he had to decide now. The Germans were moving at 200 miles an hour, over three miles a minute.   They were already half way across the Channel.  Time was already up.

Park weighed the odds.  It was a tough call.  The unusually clear skies suggested the Luftwaffe would launch a real bomber attack. They were running out of time to launch an invasion.  Winter was approaching, and the clock was ticking for the Germans too. If they were going to launch a full-scale invasion of the British Isles, they would have to act soon.  He knew that across the Channel, the Luftwaffe’s leaders were getting desperate.  And the planes were heading on a direct course for London.  This was a clue because in the last few days, he’d noticed the German’s had shifted their strategy.  They’d stopped attacking his airfields to focus on the capital, in a desperate attempt to crush British morale.  But Park still couldn’t be certain the Germans weren’t baiting his planes into a trap.

Park’s decisions hadn’t been perfect over the summer. He’d fallen into these traps before, each time endangering his precious pilots and fighters.   And even when he was right, there were consequences.  A growing chorus of officers and politicians were howling for his removal because they wanted him to meet every German raid with a massive response.  To add to the pressure, Churchill had dropped by this morning, and now Britain’s Prime Minister sat quietly watching the situation develop on the map table from the balcony.  Both of them stared as the block neared England.

Churchill broke the silence, “there appear to be many aircraft coming in.”

Park made his decision.  He ordered nine squadrons into the air.  Over 100 fighters would soon be airborne. This time, he gambled, it was a real attack.

“There’ll be someone there to meet them,” he replied.

In England, September 15 is now known as Battle of Britain Day.  The British threw all their resources into the fight that autumn morning and decisively beat the Germans. It was the day the RAF won the battle for their nation’s survival.  Stung by their losses, the Luftwaffe’s morale plummeted. German commanders had told their pilots the British were down to their last fifty fighters.  Instead they learned that the British were still a force to be reckoned with.  Hitler indefinitely postponed his invasion of England two days later.  His air force had failed to crush the RAF. 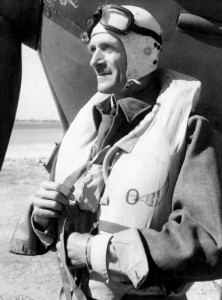 Sir Keith Park was the Commander of Group 11. His brilliant command of resources was crucial to the British victory.

Britain won because leaders like Park knew the nation’s survival depended on wise use of their resources.  On a daily basis they had to distinguish between essential threats and feints. The RAF started the Battle of Britain heavily outnumbered.  They had limited resources and had to husband them closely for any chance at survival.  If they committed their planes and men to counter every possible German incursion, the country would not survive the war. Constraint enforced a discipline on their decision-making that we often do not have as leaders today.

How often do we distinguish the essential threats to our work, our projects, and our organizations?  How often are we spending our resources chasing feints, defending ourselves against things that do not really matter? I’ll argue based on my experiences both as a leader and as a leadership consultant we lose sight of where our resources are going.  We lose the focus that can separate success from failure.  We spend our time responding to issues that aren’t important. We attend meetings that are irrelevant. We entangle ourselves in territorial squabbles and office politics.  We extinguish ourselves putting out “fires.”

What effect does this have on our resources?

Like Park and the RAF we have tangible resources that we track: dollars, people, and equipment.  Chasing feints burns these up faster than we expect.  What about the intangibles: time, influence, morale?  We have a harder time tracking these resources, and those are less easily replenished than dollars or personnel. If we are not distinguishing between threats and feints in our jobs, we are burning these too.  Then when the real threat arrives we find we’ve already depleted our assets.

Anyone involved in the modern workplace knows we are spreading these resources too thin. We try to do too much with them. We lack focus.  And we wonder why we work so hard, but don’t accomplish much. We wonder why we are burning ourselves and our teams out.

We need to get better at distinguishing what’s worthy of our resources and what isn’t.  Define in a sentence what your goal is, what success looks like.  And be specific. Make it tangible, quantifiable, something that’s a clear benchmark to let you know if you’re succeeding or failing. Write it down somewhere you can see it: a post-it note on the monitor, the corner of a whiteboard.  Every time you are faced with a potential problem, look at that goal and ask yourself if this problem is a direct threat to it.

In the comments, tell me about the threats and feints you faced in the last week.  How did you distinguish between them?  Have you ever been wrong?  If so, what happened?