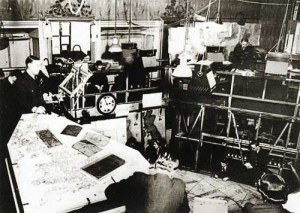 The Operations Room at Bentley Priory

At Fighter Command Headquarters, Dowding built an Headquarters Operations Room to oversee the air defense of Great Britain. This Operations Room centered around a large map table that displayed the British Isles. It was marked with the same British Modified System Grid that was common throughout all tables. Plotters stood around the table. Each plotter was in communication with Observer Corps, RDF stations, and the Filter Room.

As raids were “told” from the Filter Room, the Plotters placed raid block markers on the map. As the raid progressed, plotters used long wooden rakes to push and maneuver the raid markers around the map table. They marked the raid’s path with arrow shaped tokens.  These tokens were color coded, indicating how old the information was. This was an ingenious time keeping system that was in use throughout the Dowding System. 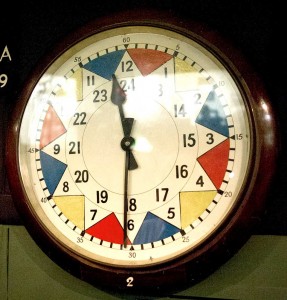 The Sector Clock with the ingenious five minute color segments

A large “Sector” clock on the wall was divided into five minute segments. The segments were colored, repeating Red, Yellow, and Blue.  As the minute hand moved through each segment, the arrow tokens used on the map table matched that color.  Because only three colors were used, the colors repeated every fifteen minutes.  This repetition was called “the color change” and was a signal to all plotters in the Dowding System to remove the markers that were older than 15 minutes.  This practice ensured that the information on the table was never more than 15 minutes old. These clocks were installed in all Operations Rooms in the Dowding System, ensuring that everyone involved in air defense was synchronizing the raid information.

The Headquarters Operations Room map table portrayed the whole British Isles.  Due to the scope of the information, The Controller and the Air Chief Marshall Dowding used the table to make strategic decisions and communicate between other military services.  They coordinated defensive strategy and initiated air raid warnings in affected areas. They abstained from making interception decisions or issuing tactical orders to squadrons. These decisions were better handled by the Group level commanders as they had a better understanding of their capabilities and resources. Headquarters intervened only when raids were located between the boundaries of adjacent Groups. In these cases, they would assign the responsibility to the appropriate Group. Although this degree of delegation was controversial with the Air Ministry, it was an crucial advantage during the Battle of Britain.  This division of duties ensured that the RAF’s limited resources were being used to their best advantage. It also freed the Group commanders from coordinating with other branches and allowed them to focus on the job of intercepting incoming German raids.