The British survived the Battle of Britain, despite the odds.  Although the world does owe much to “The Few,” it was not just the pilots that won the battle.  Victory was the result of an improbable project that ACM Hugh Dowding had begun years earlier.

That project was the development of the world’s first integrated air defense system.

Now called the Dowding System, his organization integrated people and technology to detect attacks and coordinate responses. This allowed the RAF to conserve its meager resources.  Their fighters would only be launched when German planes were identified.  The alternative would have been standing patrols, which were beyond RAF resources. This made the Dowding System a critical invention, as at the start of the Battle of Britain, the RAF was outnumbered 4.5 to 1.

Dowding built a network of these stations, called Chain Home, around the coastline of Britain. Each station supporting its neighbors.  By the end of the Battle of Britain, 56 stations were in operation.

Each RDF station in the chain passed information from their stations to a central Filter Room at Fighter Command Headquarters.  There a specialized team filtered it; turning the raw data into a clear picture of the incoming raids.

After filtering the raid, a Teller in the Filter Room passed the information throughout the system. 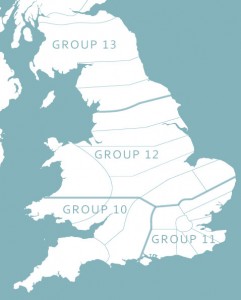 There were 4 Groups (10,11,12,13) based on geography.  Each Group was divided into several Sectors.  Each Sector controlled RAF airfields and their squadrons. The Teller communicated the raid to the both the affected Groups and Sectors simultaneously.

Each Group and all Sectors had an Operations Room, where the raid information was displayed using maps and blocks.  Plotters situated around a map table moved the raid blocks across the map as the raid progressed and they received updated information.

Once a raid appeared on a Group Operations Room map table,  a Controller would review the situation and decide when and where to “scramble” his squadrons to defend against the incoming raid. This was like chess.  The Controller had to intuit the German’s target, decide if it was a real threat or a feint, and order an appropriate response.  If he got it wrong, he would waste his precious resources.  Once he had determined how to respond he would communicate with the appropriate Sector and order the squadrons into the air.

Once their squadrons were scrambled, the Sector Controllers guided their pilots to an interception with the German planes.  This was a difficult technique that relied heavily on experimental technology, called Direction Finding (DF).  Once the pilots sighted the enemy raid, they radioed, “Tally Ho!” This was the signal to their Sector Controller that they were engaging the enemy.  From this point, they were on their own. 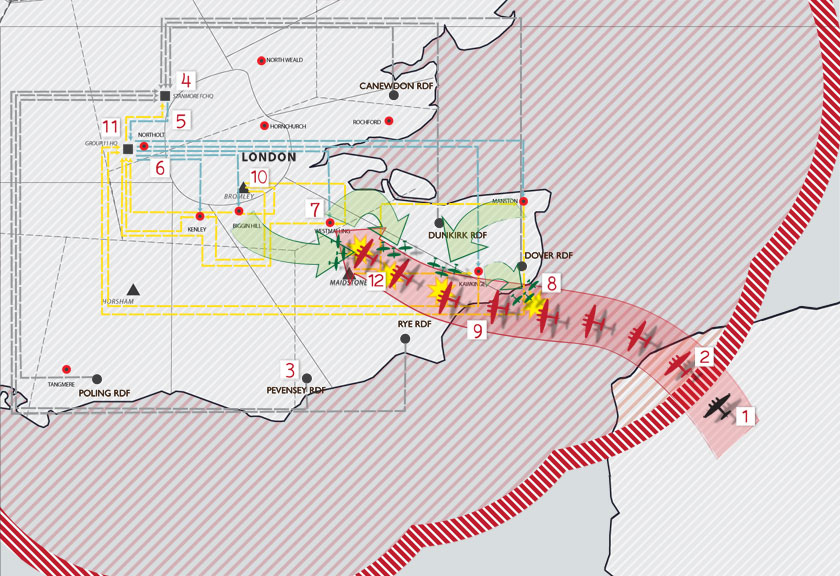 How the Dowding System worked in response to a German Raid

How it Worked: An Example of a German Raid