To succeed under pressure we have to trust.

Every day brings the same routine for the Royal Air Force’s pilots. Wait.  Stare at magazines, but never turn the pages.  Watch the hands twitch around the clock face.

As the morning wears on the pilots think, “It’s almost too late, the Germans won’t be coming.” But invariably they hear that sound, the momentary, almost-silent click of the relay that always precedes the phone by a fraction of a second.  Twelve faces look up.  And then the ring. 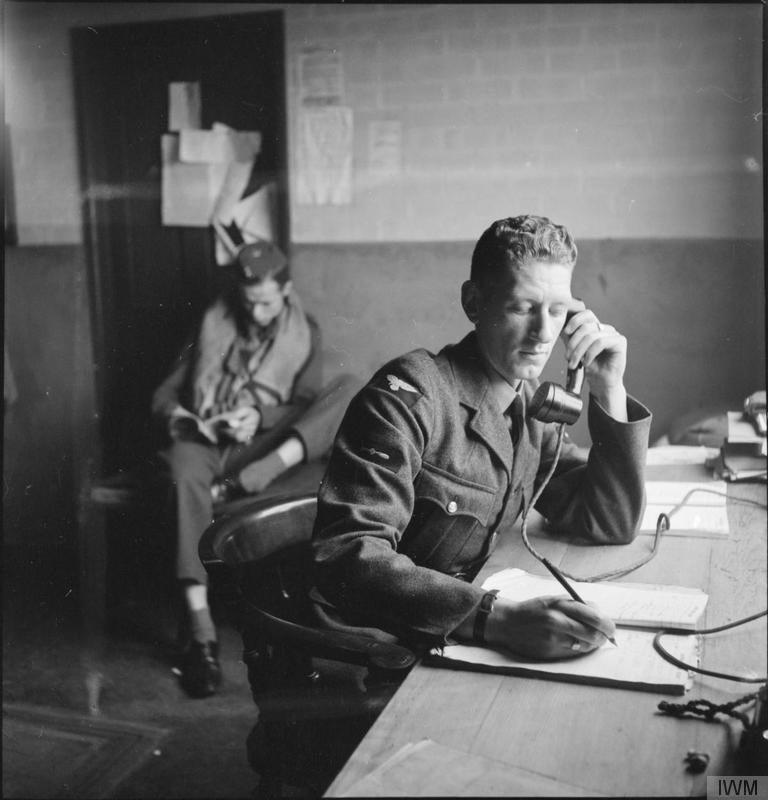 The routine breaks and adrenaline begins to heighten these young men’s senses.

Everyone runs for the door, sprints over dew-slicked grass down the line of planes.

All twelve Spitfires on the runway are ready to fly. They have been since dawn. Every morning, while the pilot choke down toast and sip strong tea, their ground crew is prepping the twelve planes as though battle is a certainty. They repair damage from the day before and warm up the engines. By dawn, when the pilots are finished with breakfast and come to the airfield for dispersal, they are greeted by twelve planes’ Merlin engines, 144 cylinders crackling and roaring in unison.

Now, with the enemy approaching, pilots snatch their parachutes and with trembling fingers struggle to adjust the straps and buckles. They have one job, shoot down German planes. And every person at the airfield who isn’t flying a plane is playing a role to ensure the boys in the cockpits can focus on their singular task.

Riggers, the slang name for ground crew, are doing the final checks on the cockpit instruments. They clear out of the way as the pilots clamber up the wing and leap into the cockpit.

The riggers are already out on the wing, bracing against the propeller’s slip-wash, holding over the pilots shoulders the sutton straps that will anchor the pilots firmly in their seats against the powerful g-forces that will tear at them as they bank and dive. They ram pins into the harnesses, locking the pilots in place.  The canopies slam shut and the noise outside fades.

Each pilot does a last double-check.  Propeller pitch set to fine…radiator lever on the floor, the open position.  Merlins overheat easily in the Spit but the ground crew knows their jobs.

The pilots turn to the riggers now standing by the wingtips.  The men who will be staying on the ground offer a quick salute and pull the chocks away from the wheels. 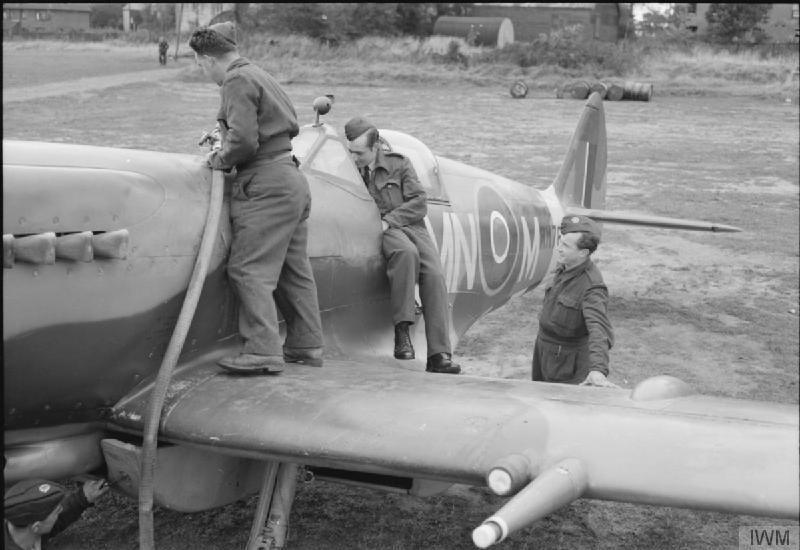 Throttles forward. The Spitfires tremble.  Rolling across the grass, the squadron leader’s voice crackles over the radio.

They don’t yet know where they’re going. No time for briefings before hand. They will get that information once they’re in the air. That’s standard, and every man saying goodbye to Britain, hopefully not for the last time, is accustomed to heading skyward with no idea where the battle is.

Advance the throttle slowly, all eyes on the leaders’ wing to keep spacing. Racing across the grass now, the tails lift off the ground. Steady…steady. Just a few seconds longer, then into the air. Twelve aircraft take off in unison, racing above the airfield.  Landing gear up and turning left.  Throttles set to climb and the squadron claws desperately into the sky.

Eleven planes follow their leader in tight formation as they wait for guidance from Sector Headquarters.  As they climb the Sector Controller’s voice cuts through the engine noise, his voice calm over the radio.

The squadron turns in formation and climbs through the clouds, concentrating on their neighbors’ wingtips as the minutes pass.  The Sector Controller is tracking them on his map table, bringing them closer to the Germans. The fliers, and Britain herself, depend on the controller’s accuracy to guide them to the enemy.

“Gannic leader, this is Sapper.  You’re getting close now. Vector 140.”

The pilots watch their compasses as they swing in unison through 140 degrees. They pass 12,000 feet…14,000 feet.  Their engines straining to pull the planes higher, to gain the advantage.  Twelve pairs of eyes dart across the sky, straining to spot the raiders.

“Gannic leader, Sapper. They should be off to your left.”  All eyes turn, and rising above the clouds a massive formation of black specks.

The radio crackles. The squadron leader cries out, “Tally ho!  Tally ho! I see them!  They’re at 15,000 feet and there are hundreds of the buggers!”

The Sector Controller puts his microphone down.  His job is finished.

The pilots switch on their gunsights and push the throttles forward.  Engine roar fills the cockpit. Twelve planes half-roll into a diving attack.   It’s all up to the pilots now.

Trust was the RAF’s lifeblood.  The squadron pilots had to be in the air in less than two minutes.  To launch that fast they had to put their faith in their ground crews to ready their planes.  As a pilot, I find it astounding that they climbed into a high performance, 1000 horsepower fighter and took off without performing their own rigorous preflight inspection.  But they did not have time; they had to place their trust in the crews.

Once airborne the pilots had no idea where to go and were completely dependent on the Sector Headquarters to guide them to the Germans.  They relied on the Sector Controller, a man on the ground, standing over a map and radioing directions, to guide them safely. And that man relied on all the people in the Dowding System to give him the right information so that he could do so.  So in the end twelve pilots were hurtling blindly through the sky in the fastest planes in the world, with their lives in the hands of hundreds of people who were all trusted to do their job.   Without that trust, the system would have collapsed.  The British simply did not have time or resources to operate otherwise.

It is easy to say trust is important.  Instinctively we know that any organization needs a solid foundation in trust.  But how do you build that trust as a leader, between you and your employees?  Even harder, how do you encourage your employees to trust each other?  They are expected to both work together and compete with each other.  Building strong trust is tougher than a weekend retreat or a clever speech.

Here are a few things I think the RAF did well to encourage and build this trust.

They created a common purpose.  The Battle of Britain was a fight for survival that gave every man and woman in the RAF a common cause.  Obviously, in our organizations we probably aren’t grappling with life and death issues, but what can we do as leaders to define a common purpose and instill a sense of shared struggle?

They built relationships. Although it was not an official regulation, pilots were expected to visit with and forge relationships with their ground crew. Pilots would not dare miss checking on their riggers and fitters (invariably still working to patch up the “kite” for tomorrow’s missions) before turning in for the night.  These actions built strong relationships.  The ground crew understood not just the importance of their jobs, but they knew the person behind it.  It made them far less likely to cut corners or take shortcuts that would endanger someone that needed their help.  But how often do we encourage the people we lead to forge these types of relationships?  How often do we encourage our people to take care of each other?

They encouraged transparency across all groups.  Group Commanders encouraged their pilots to visit the Sector Headquarters Operations Rooms when off duty, to meet the people who worked there and see what they did. The pilots learned how they processed information, how they relayed directions to flyers and their strengths and limitations.  It ensured the people providing essential information to pilots about where and how to fight were more than disembodied voices in the RAF flyboys’ earphones.

How often do we encourage this type of transparency in our organizations?  Not the surface level transparency we give lip service to, not just cc’ing people on emails, but the deep insight into how our organizations function.  Real trust can only come from knowing, and accepting, both the good and bad.

These are just three things I see in the Battle of Britain that helped the RAF build trust.  What other factors do you see in this story?  What else do you do as a leader to develop trust in your organizations?