Can we earn our employee’s respect through critical feedback?

Eighteen thousand feet above the Isle of Wight, enemy German planes swarming around him, George Westlake’s engine went silent.  The fighter plane’s twelve cylinder Merlin should have been deafening. It also should have been turning the propeller at over 3,000 revolutions per minute. Instead, the propeller was windmilling lazily. The only sound was the air breezing across the canopy of his Hurricane. 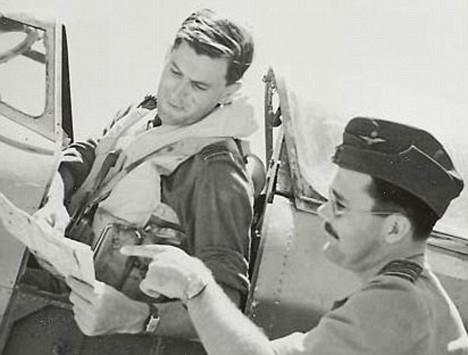 George Westlake in the cockpit of a fighter

The middle of a dogfight with Messerschmidts was the worst place to have a dead engine.  George kicked the rudder hard and put the Hurricane into a spin, plummeting as the plane’s airframe groaned under the strain.  He pulled out at 10,000 feet and arched around, peering over the tail. No one was following him. But now what? The Hurricane was losing precious altitude, and without power he could only stay in the air for so long.

The speed from the dive carried the plane across to the mainland. Through the haze, George could just make out the emergency airstrip at Westhampnett.  He could safely bail out, but the airfield was close. If he could land the Hurricane he’d save a valuable piece of equipment, not to mention earn some bragging rights in the mess hall.  He decided to try, so he trimmed the plane controls to stretch the glide. 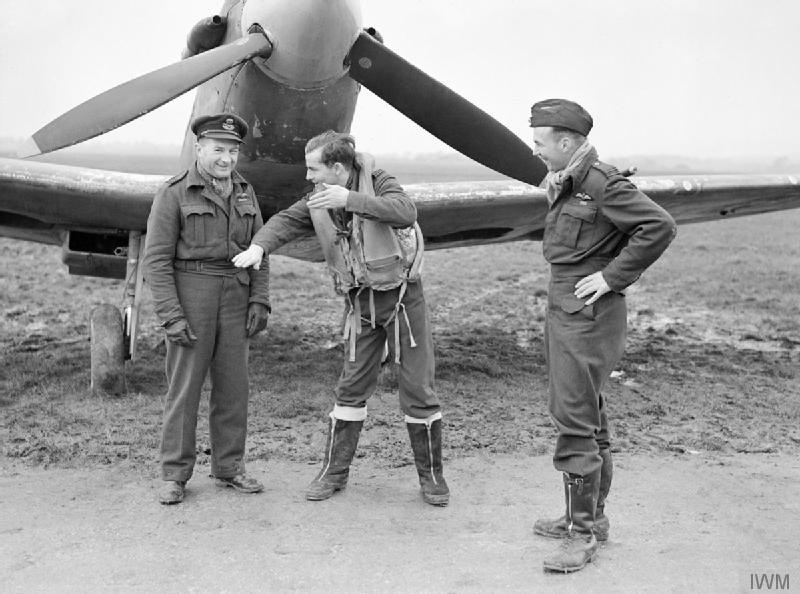 With 500 feet of altitude he passed over the hedge marking the airfield’s boundary. He was going to make it, and could probably even land it with the wheels down.  He turned the Hurricane to line it up with the runway.  400 feet.  He pulled the gear release with his right hand, squinting over the nose at his landing spot. The gear clunked into place.

But the landing gear was a mistake.  With the extra drag he was too slow, and a line of poplar trees at the end of the runway loomed in the windshield.  The Hurricane was too low and too slow to clear them.  He pulled up but the heavy plane stalled and sank into the trees, tearing the wings off.  The plane plowed into the earth at the end of the runway, coming to rest upside down on its canopy. George hung in his sutton straps, defeated but alive.

Little did he realize the real pain was delayed until the next day when his Commander, Keith Park summoned him to his office in Uxbridge. George Westlake now had a bigger problem than a trashed Hurricane, and it was facing him from across three feet of desk. 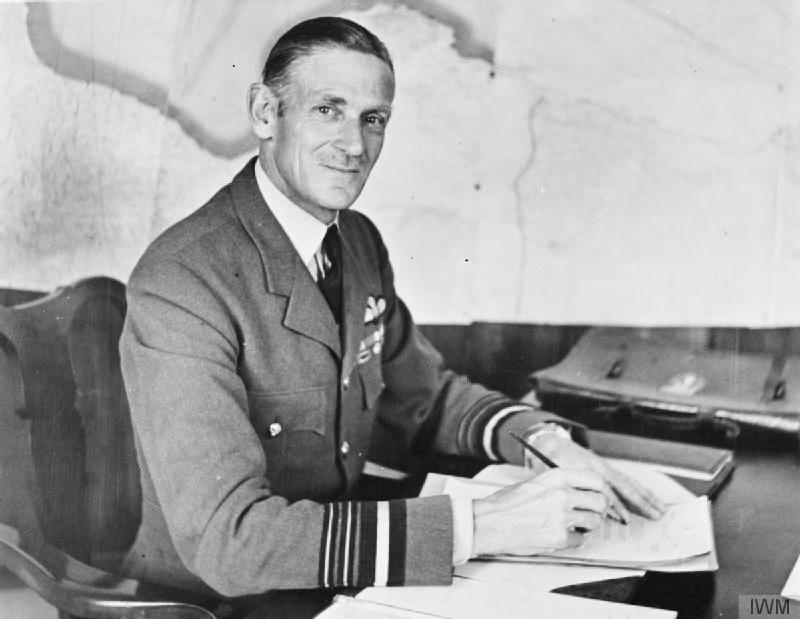 George’s bravado drained away as he stared at Park, who listened intently while George recounted his story.  At the end, Park smiled. He asked George how many aircraft he had shot down so far.

He had bagged an Me109, no easy feat in a Hurricane.

Park then proceeded to calmly tear him apart. He peppered George with questions, forcing the pilot to face every bad decision he had made the day before.

Pilots were more valuable to the RAF than planes.  George knew his commanders preferred pilots jump from their planes rather than try and crash land.

“Why did you try and land with the wheels down?”

In  an emergency you didn’t lower the gear until you had the runway made. Far better to do a belly landing.  His attempt to land wheels down had been an act of bravado.

Finally, Park asked him, “and why did you hit those bloody poplars?”

George did not have an answer for for that either.  Emergency or not, he had made a series of poor decisions, and they led him into those trees.  He was lucky, a few inches more to either side and he’d be lying in pieces along with his Hurricane.

George was deflated, but Park’s lesson wasn’t over yet.

“Well, don’t hurry back to your squadron at Tangmere…” Park said quietly, leaning towards him over the desk.

George was mortified.  He knew what was coming.  He was being grounded, the most awful, humiliating punishment a pilot could face.  He waited for those horrible words, but they never came.

“No,” Park continued, “rather…take the morning off and read the papers in the Mess. I’ll be in at lunchtime and you can buy me a beer.”

George was stunned.  It was unexpected, unheard of.  He wasn’t grounded.  Instead, Park had given him a day off and the chance to have a beer with his commander. Later when Park joined him in the Mess, George bought him that beer. And Park bought him a few and then asked George to join him for lunch.  He spent those hours swapping stories with the man who could have destroyed his career, but instead treated him like a human being.

As George later told Park’s biographer, “to this day I simply cannot remember who else was there.  As far as I was concerned, I could see only the great Keith Park – what a man.  From that day on I worshipped him.”

When I first read this story in Vincent Orange’s biography of Keith Park I folded the corner of the page over.  It was not only a testament to Park’s character, but also illustrated a point that I had been trying to make to my clients, but had not been able to clearly articulate.  Too often I have watched leaders evade or dodge confronting employees about mistakes. Too often I’ve watched their listless approach to these difficult conversations dilute their leadership.  Getting this right is critical, because people will always make mistakes.  And what George’s story tells us is that every time they do, leaders have an opportunity to display charisma, build stronger bonds, and increase loyalty.

So how did Park do it?  It was all in his approach:

He confronted the problem directly

Park called George into his office immediately and dealt with him alone.  Face to face.  This seems obvious, but it’s by far the most neglected approach.  We all think we do this, but let’s reflect on our leadership honestly.  How often has someone on our team made a mistake and our response is to call a team meeting to “reinforce policy” or send an email restating procedures?  The passive-aggressive approach.  These meetings or memos never mention the offender directly and avoid all hints of confrontation. And this approach does prevent confrontation, but it kills morale.  You lose your team’s respect.  Th offender realizes you won’t confront the issue and everyone else resents the unnecessary reminder. It’s a lose-lose situation and it displays weak leadership.

He treated his men with respect

Have you ever worked for someone who’s idea of providing criticism is to stamp their feet and scream?  Lecture you like a child? What was your impression of that person as a leader?  Contrast that with Park’s approach.  He started the conversation by listening to George’s story and then asked why he made his choices. Only then did Park criticize his actions, calmly and professionally.  He treated George as the competent, intelligent adult he assumed him to be. That’s the type of boss people want to work for.

George destroyed a Hawker Hurricane, a very expensive, very critical piece of equipment.  He almost killed himself.  Park had every reason to ground him, even destroy his career.  But he didn’t.  Instead, after tearing him down, Park closed the book on the incident.  No official reprimands, no written warnings, no documentation for the file.  He knew that a broken man is broken forever.  He’ll never take initiative again.  A chastised man is valuable.  He understands expectations better, works smarter, and thinks harder.

Ultimately, Park was right to spare Westlake.  George went on to display gallantry in over 300 sorties, earning the Distinguished Flying Cross in 1942.  He later rose to the rank of Group Captain and led Operation Bowler, a stunning pinpoint raid that destroyed German shipping while sparing historic Venice.  For his successful leadership he was awarded the Distinguished Srvice Order.

I keep a picture of Park on my desk to remind me to get out from behind my desk, listen to my team, confront problems directly, and always show mercy.  It’s not much of a system, but I can’t think of better leadership advice than that.

But what do you think?  Is Park’s approach relevant to modern leadership?  What else do you see that is valuable in his approach?